Greetings friends,
A big thank you to people who supported my May Day appeal or in the many ways that people do. My 13 May report outlined the initial itinerary from Central Hawkes Bay District Council to my presentations at Horowhenua District, Waikato and Taranaki Regional Councils and the effort to repair Tinkerbell. Also there was Mike's presentation at Nelson City Council.
Next up Tinkerbell requires the new windscreen and a warrant inspection, if you are able to assist cheers: Public Advocacy Donations Account 389017-0439360-00 ref: TPP roadie
A big week of LTP presentations
Monday 14 May last week local government LTP project took me to Martinbourough to the South Wairarapa District Council (SWDC). SWDC and their Maori Committee both adopted the TPP policy solution mid 2015. Mayor Viv Napier provided a warm welcome and and the councillors gave respectful hearing.
Tracy Livingston presented on behalf of the LTP project in Tauranga City Council (TCC) Monday evening. A big thanks to Tracy.
Tuesday 15 May saw me in Paraparaumu to apeak to Kapiti Coast District Council (KCDC) Tuesday afternoon. I had a support team; Kay Fechney, Rick Swan and Stephanie Waters who witnessed the presentation. That went well with encouragement from councillors and the Mayor for the coming presentations to councils and the FADT committee on Wednesday and Thursday. I get the sense there's a fair amount of 'in principle' support for the LTP paper and recommendations.
I stayed Tuesday night in Palmerston North and drove to Taihape to present to the Rangitikei District Council at 10:10am. Mayor Andy Watson got proceedings away and I was first presenter. The Mayor made it clear that Councillors were to offer only questions to gain clarity not to utter their opinions on the matters under sonsideration. Councillors Cath Ash and Soraya Peke-Mason asked questions with Soraya saying she enjoyed reading the paper. It appears that the women Councillors get the importance of clean politics designed with integrity. Councillor Soraya followed up with a subsequent question on CPTPP implications for Maori interests as she was Councillor responsible for the Maori portfolio.
Next up was Waikato District Council 310 klms north at Ngaruawahia. I stopped at Taumarunui for lunch, then struck a traffic jam from Te Kuiti to Ngaruawahia, so arrived a bit late. Allister West and Pene Torea were there waiting and I asked Allister to inform the Council of my lateness. We have a friend in first time Councillor Lisa Thomson from Raglan ward. Councillor Jacqui Church asked a question about council liability in relation to ISDS. She also said that she enjoyed reading the paper and agreed with its content.
It was then across to Te Aroha for the Matamata Piako District Council. As I was behind in schedule I let them know my eta. I was the last presenter. Mayor Jan Barnes thanked me for the paper and indicated Council's appreciation of my efforts.
I then turned Tinkerbell South just after 5pm to arrive in the Hutt at just after 11:00pm. A big day - lots of fossil fuel burning to cover almost 1000klms.
Thursday morning saw me well received by Hutt City Council at my 9:30am appointment. I thanked Mayor Ray Wallace for Council's previous support for the TPP policy solution before outlining the four (4) recommendations in the LTP papers.
Mayor Wallace reported that Local Government New Zealand had considered the 4 Wellbeings in Recommendation #3. He also said that LGNZ were considering the CPTPP – Ray offered to engage LGNZ and report back to me on that status.
Cr. Tui Lewis contacted me after the hearing to inform me that they heard from Aaron from Generation Zero on the question of Climate Change a couple of presentations after mine. I've answered her email highlighting that not only in the council LTP paper but also in my evidence to the parliamentary FADT select committee I had made Climate Clubs a specific recommendation for future trade and investment treaties.
I proceeded to parliament for my 11:15am Foreign Affairs Defence and Trade select committee (FADT) CPTPP treaty examination hearing and arrived in time to hear Antony Maddock, Scott Andrew, Lou Hutchinson, Leona from Hawkes Bay, and several more. There were significant points made by civil society represeantatives – the question for many is the value of participating at all given most sense that the CPTPP outcome is predetermined. My perspective on that is that vacating the field will not fix that problem – rather surrender will ensure civil society get bad outcomes.
They listened in silence and thanked me for my korero. I've been speaking off the cuff to Councils as they assure me that councillors have read the papers, which I find to be the case from direct feedback.
I operate under the assumption that the select committee members read my paper. National MP Simon O'Connor the FADT Chair offered at the conclusion that he appreciated the live links in my paper which allowed immediate access to website references.
After the FADT committee hearings we retired to the Backbencher hotel for a catch up with a coffee. 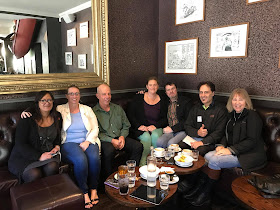 Porirua City Council's hearing was next for a 1:50pm appointment.
Mayor Mike Tana and Council were friendly and again listened politely and attentively to my korero. There weren't questions however the Mayor wanted to gather the pronunciation of my surname. After I left the Council, as I was in the passage outside I was approached by Councillor Dame Beverley Wakem.
https://en.wikipedia.org/wiki/Beverley_Wakem
She has been the Ombudsman for two terms 2005-2010 and up to 2015 so knows a bit about state secrets and how things work.
Dame Wakem offered it was the most important submission to council's process and placed local communities in the national and into the geopolitical context. I thanked her and offered in response that her words made me feel my efforts have been very worthwhile.
I didn't recognise Beverley when she came out, but did once I looked at the council website.
Also Dale Williams is of interest as a Porirua Councillor as he is a previous mayor of Otorohanga where he instituted the zero youth waste policy and strategy. I saw Dale Williams present in Motuek in 2013 where he explained the initiative.
I'm working on following up with papers to FADT and writing further reports on the LTP 2018 democracy project and its progress.
Coming week events
I present to Upper Hutt City, Tararua District, Wellington City and Greater Wellington Regional Councils next week plus attending the Open Government Partnership workshop that will be determining the NZ Government's civil society priorities. I'll be most interested in the reform of the Official Information Act recommendation.
-----000---000-----
For more details go to my blogs: